Exploring communities of power and supremacy, Omicron Chi Iota (OXI) fraternity was formed while in graduate school at the University of Illinois. “Oxi” (oh•he) translates to “no” in Greek. The manifestation of challenging a community of power—one that appropriates Greek culture by name and other cultures by force—in an embodied social practice using the tools of design and visual communication, brings to fruition a character called Haris Pilton. Haris is the president of OXI fraternity. Haris frequents establishments and events popular with the “greek” (fraternity) community at the University of Illinois Urbana-Champaign; of which has one of the largest populations of “greeks” in the U.S. Haris attempts to expose the ethics and ideology of individuals influenced by collective ethics and ideology, A.K.A brands and branded institutions—in this case "greek" brands/institutions. In a reflective and mimicking process, visual understandings of the complexities of culture(s), appropriation, racism, sexism and gender construct a critical and revealing dogmatic and behavioral conceptualism via the "greek" branded culture.
The distance of making—be it technology or artifacts—protects visual communicators/ designers physically from the loss of locality and production while under brand name, be it design firm or consumer product. This further perpetuates the aforementioned socio-political issues. Systematic subjection from design and communication practices and mediums are questioned visually with all parties involved. Creators and consumers of design/visual comm are introduced to performed comprehensions of design criticism. The aim is to shift perception and understanding of both community in topic and mediums and industry of visual communication/design.
In short: I attempt to mimic "greek" culture to reflect the ideology(s) of said community to said community while invoking the practices of viscomm/design for a similar critique.
VISUAL/VIDEO ABSTRACT
RESEARCH PAPER

PROCESS AND CONCEPTS:
Starting with the appropriation of fraternity houses in Champaign-Urbana, Illinois where the U of Illinois is located, I photoshoped the fraternities images of their houses acquired from their websites. The rebranding of the houses to ‘OXI Fraternity’ was posted to OXI’s instagram and fraternities were tagged via location, hashtag and image. This action directly says "no" to the “greek” community in Greek. The irony of not understanding ‘no’ is an exposure of cultural appropriation as well as a commentary on rape culture, a very relevant issue in “greek” communities. These actions expose morals of the “greek” community to all parties involved, as well as the ethics of certain design practices and technologies via the illusory nature of the work seen here. 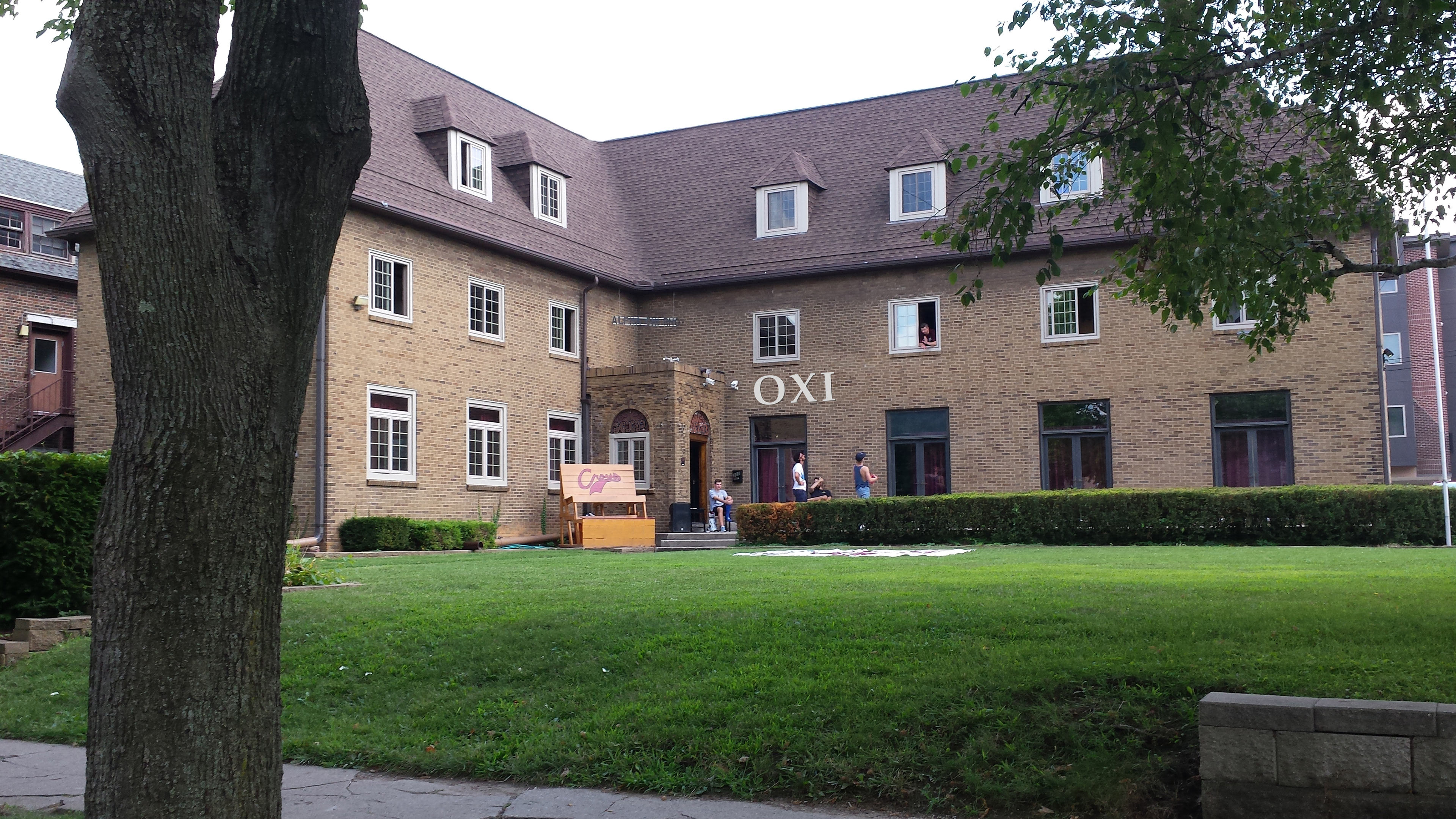 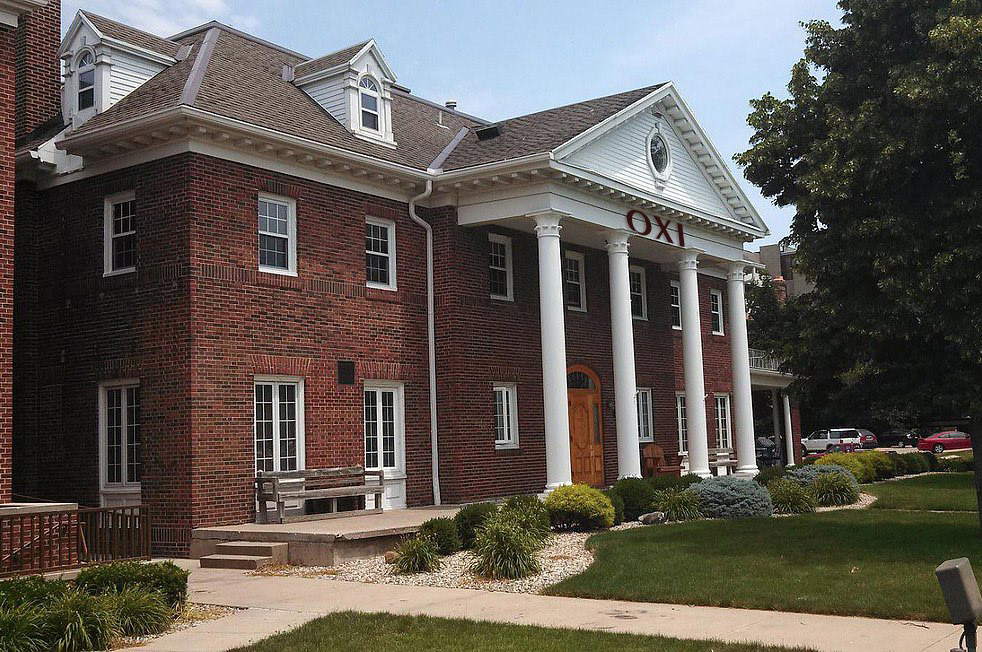 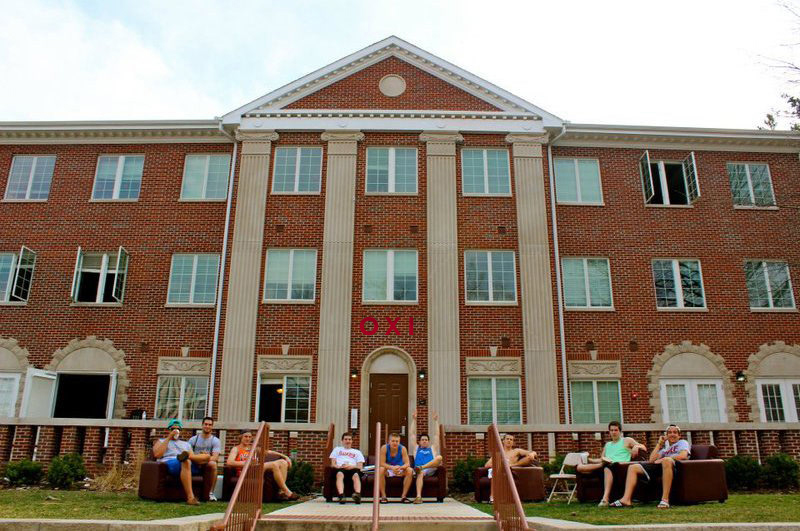 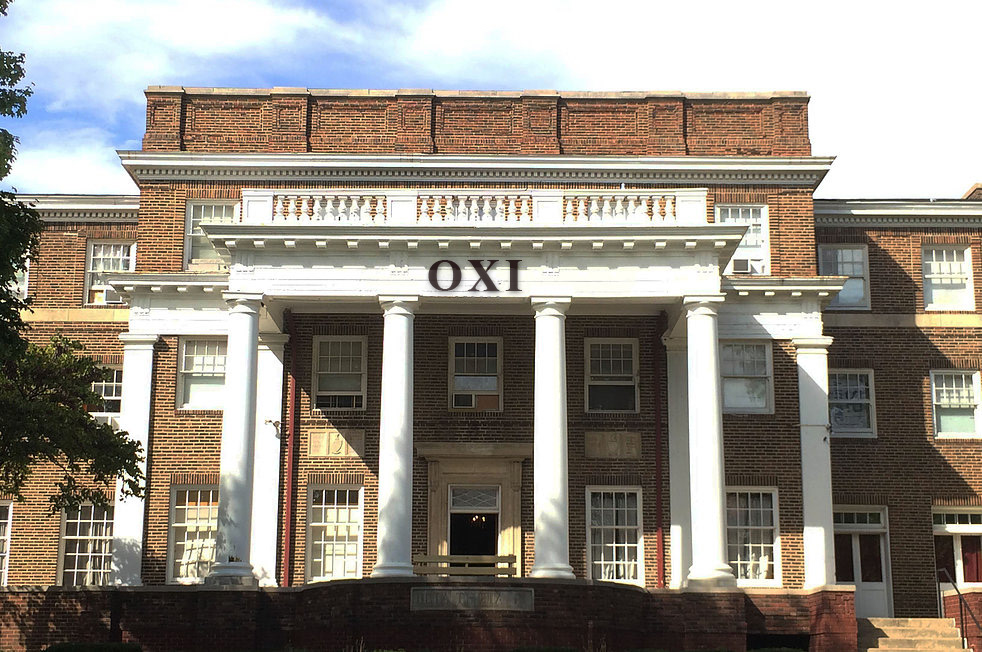 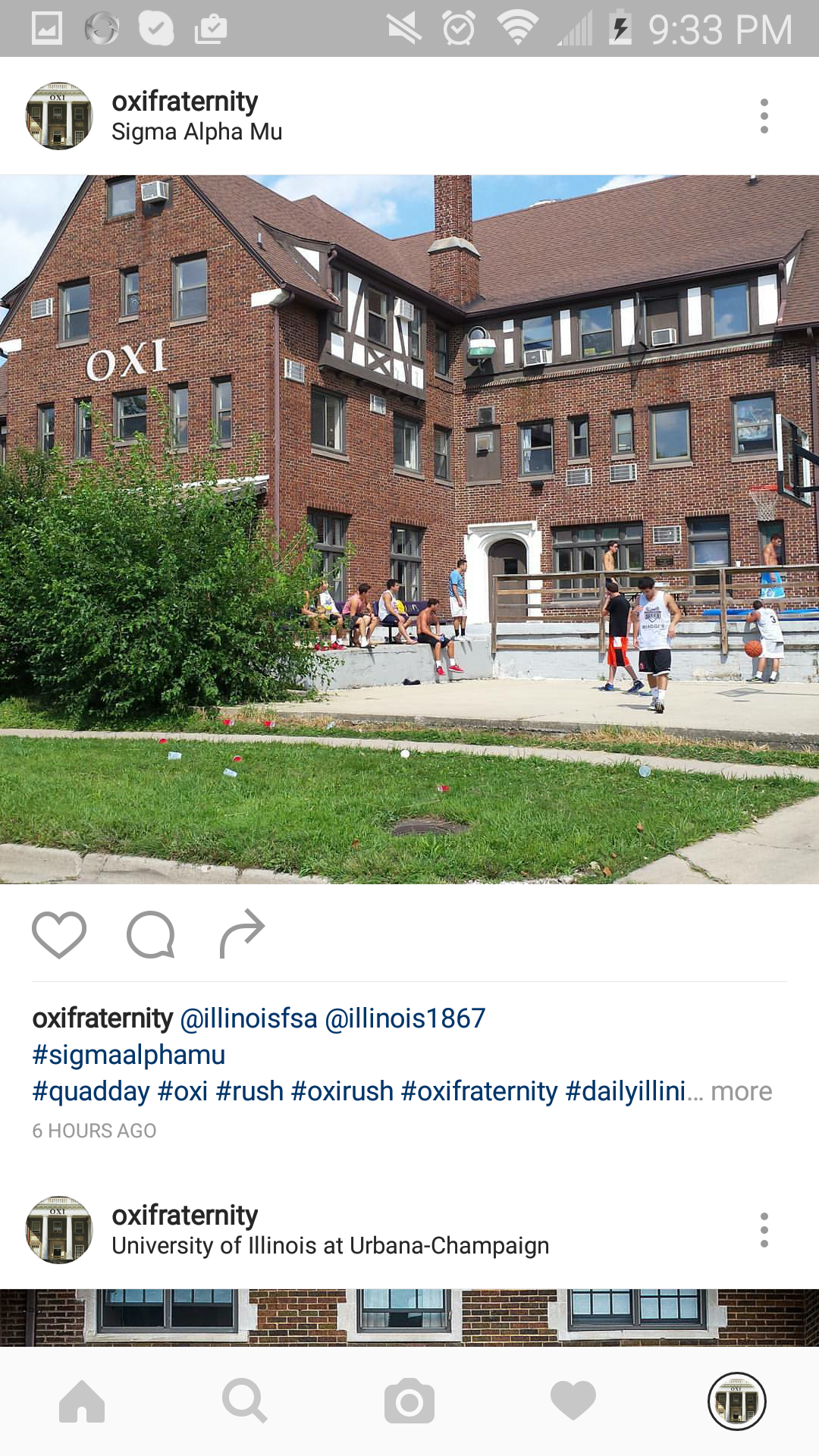 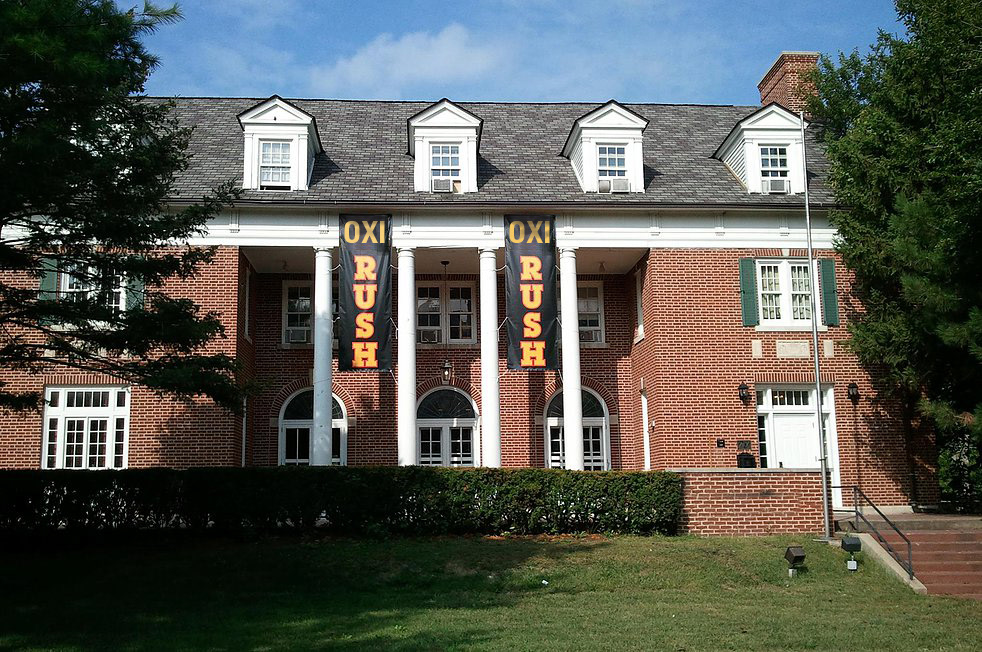 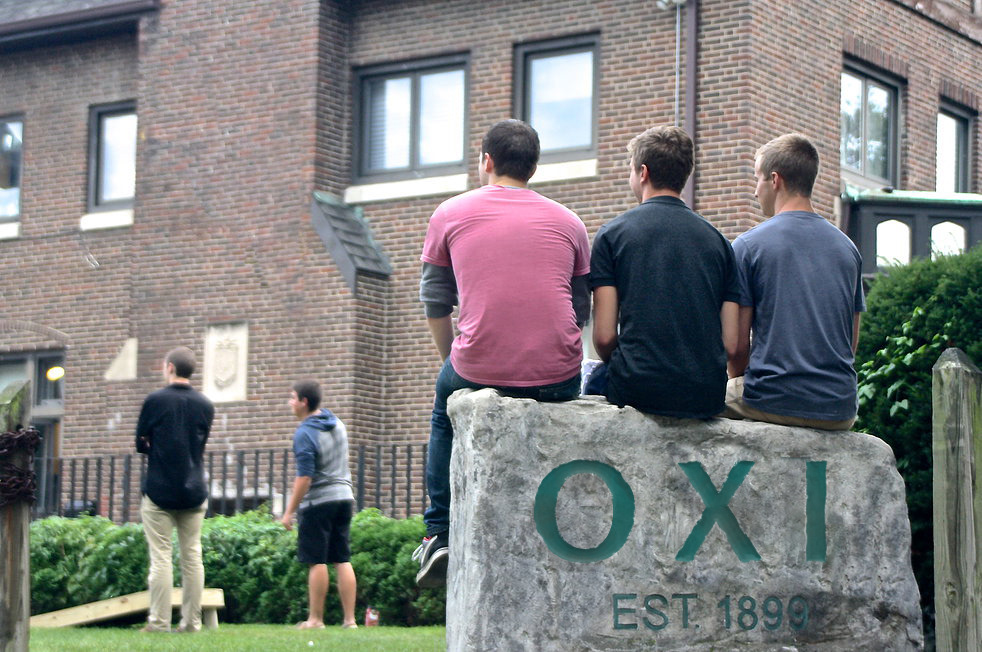 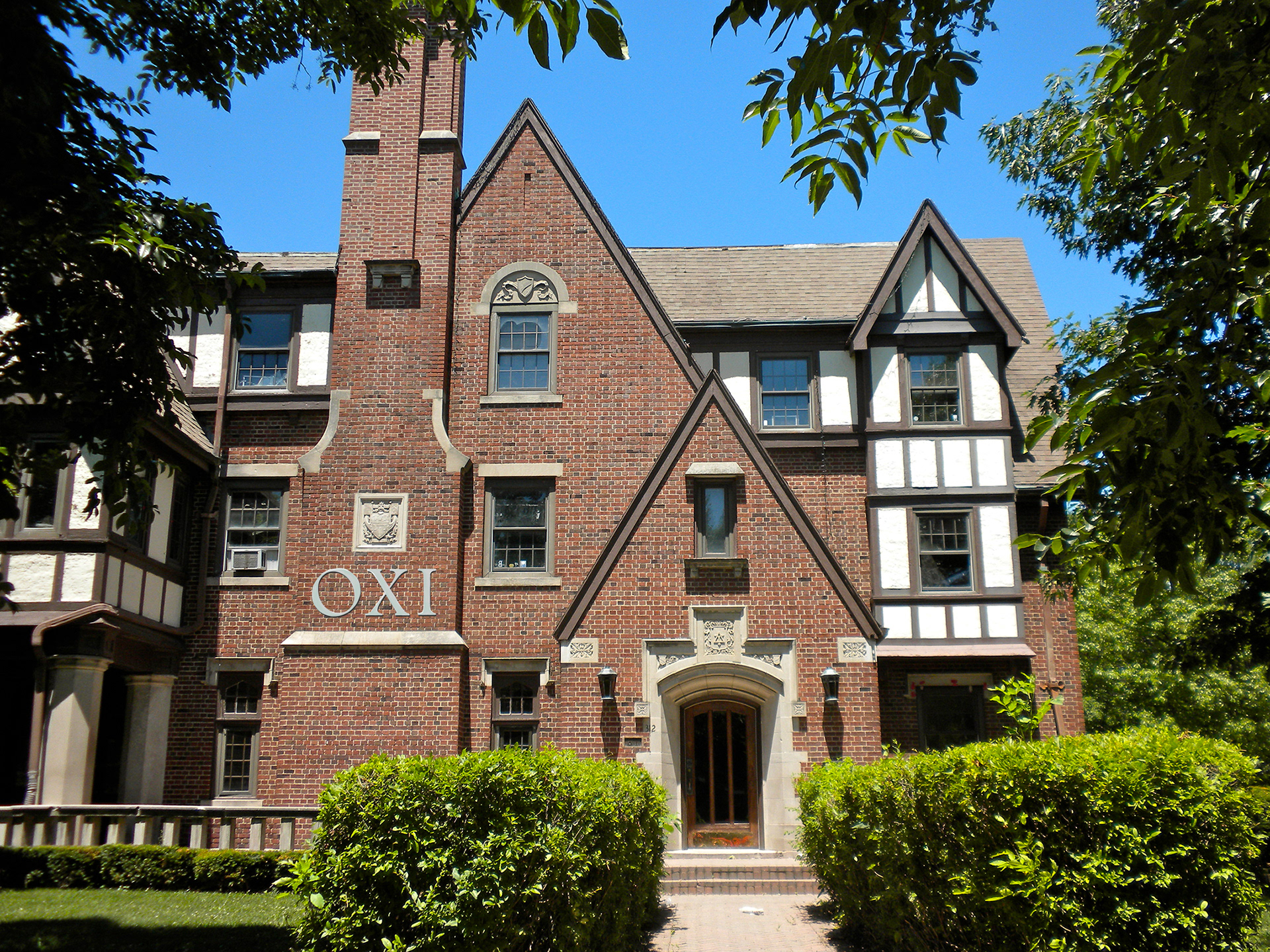 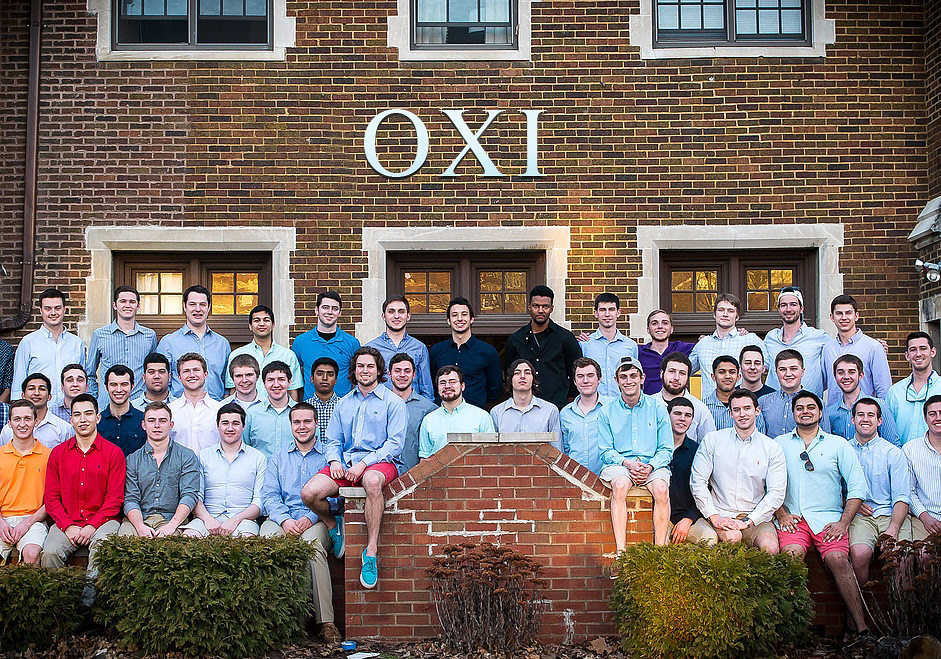 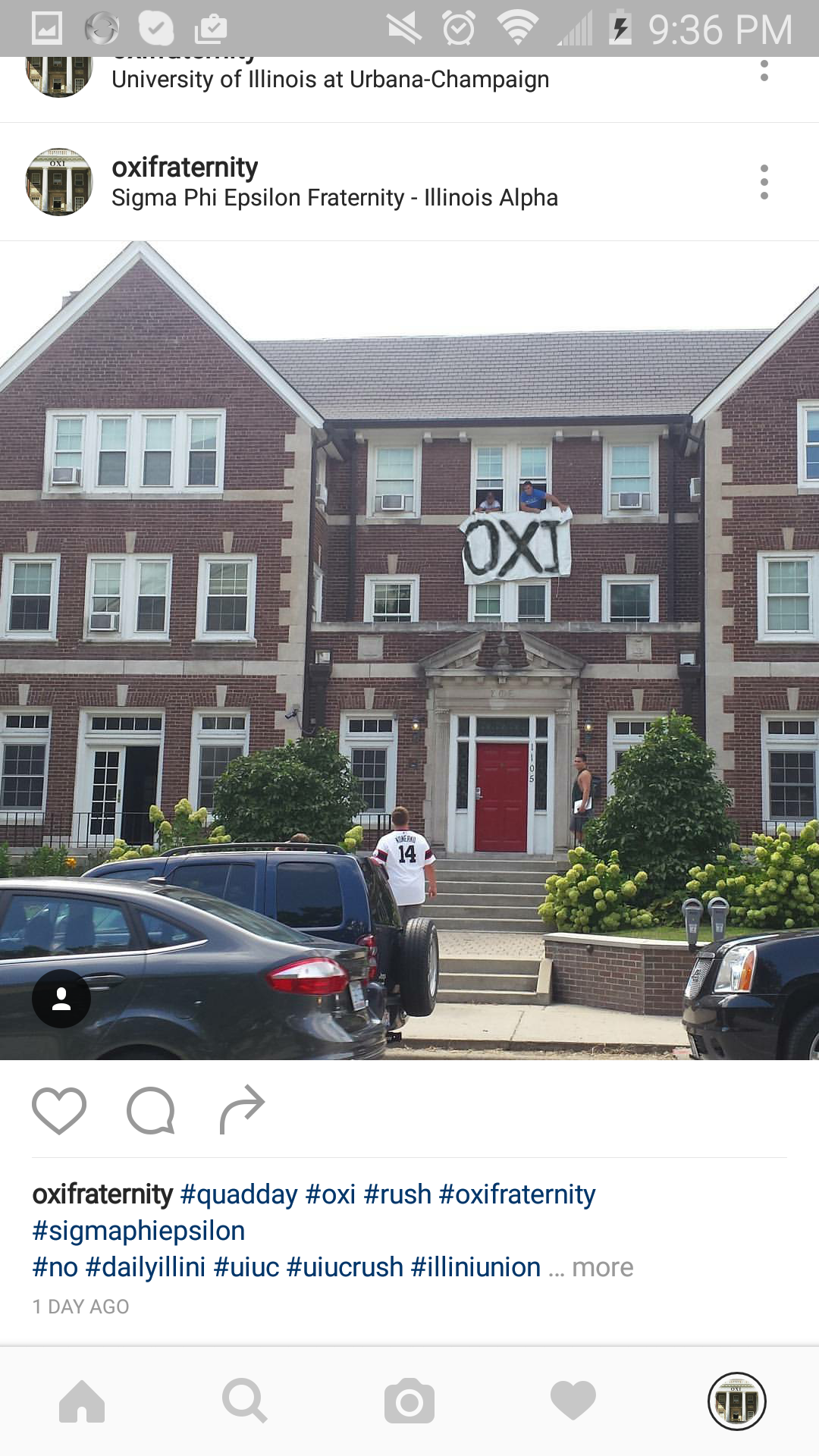 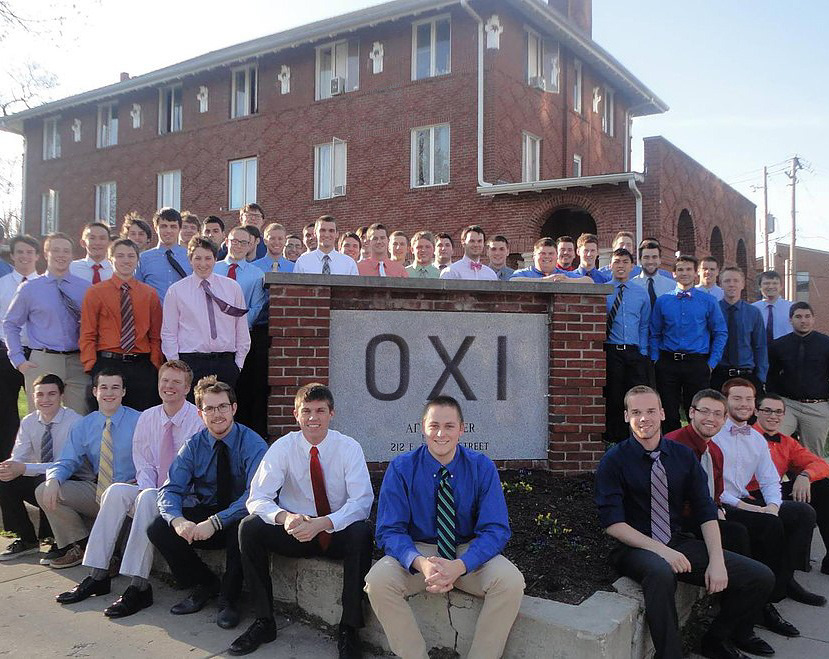 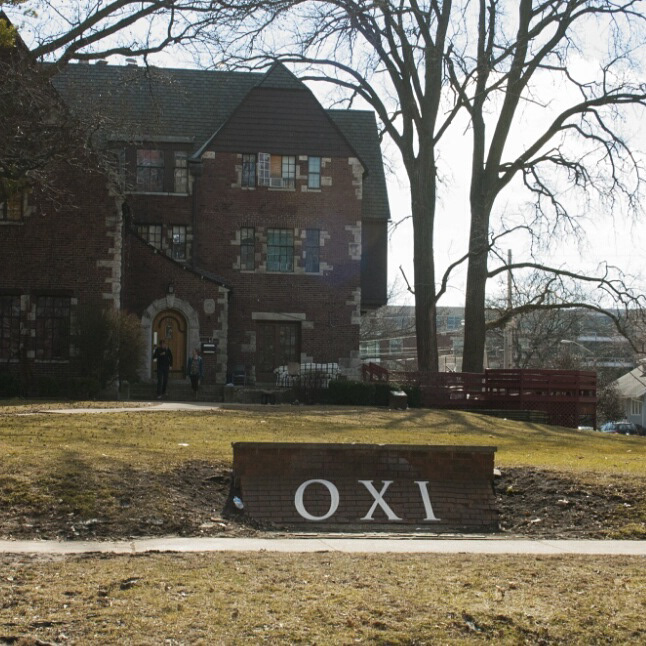 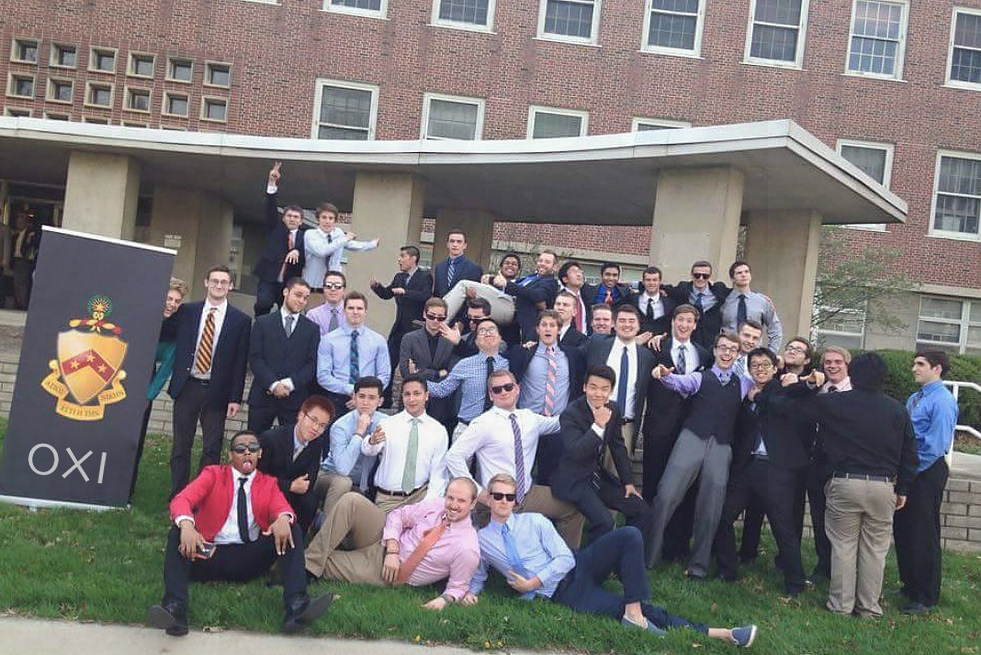 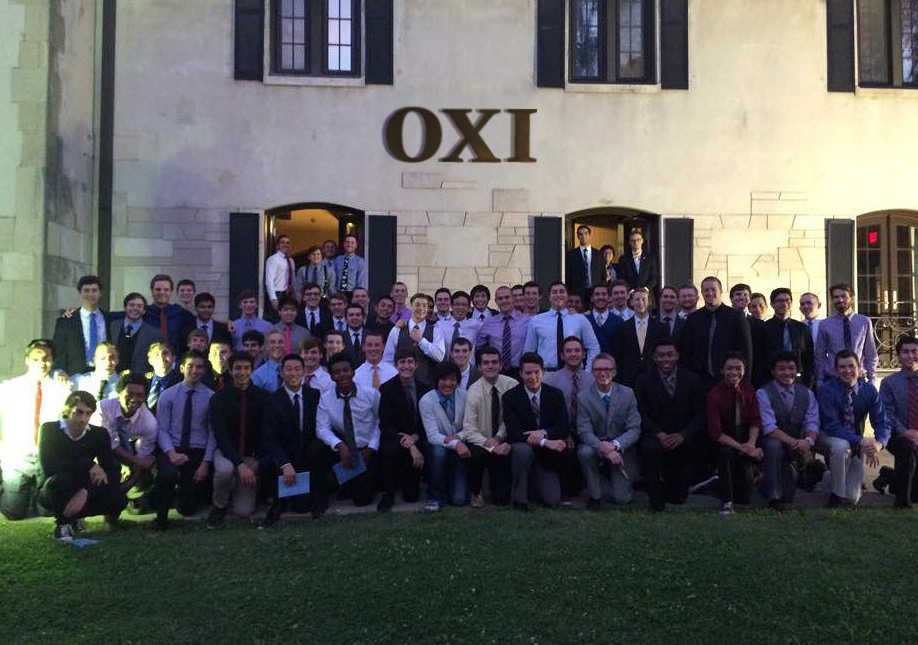 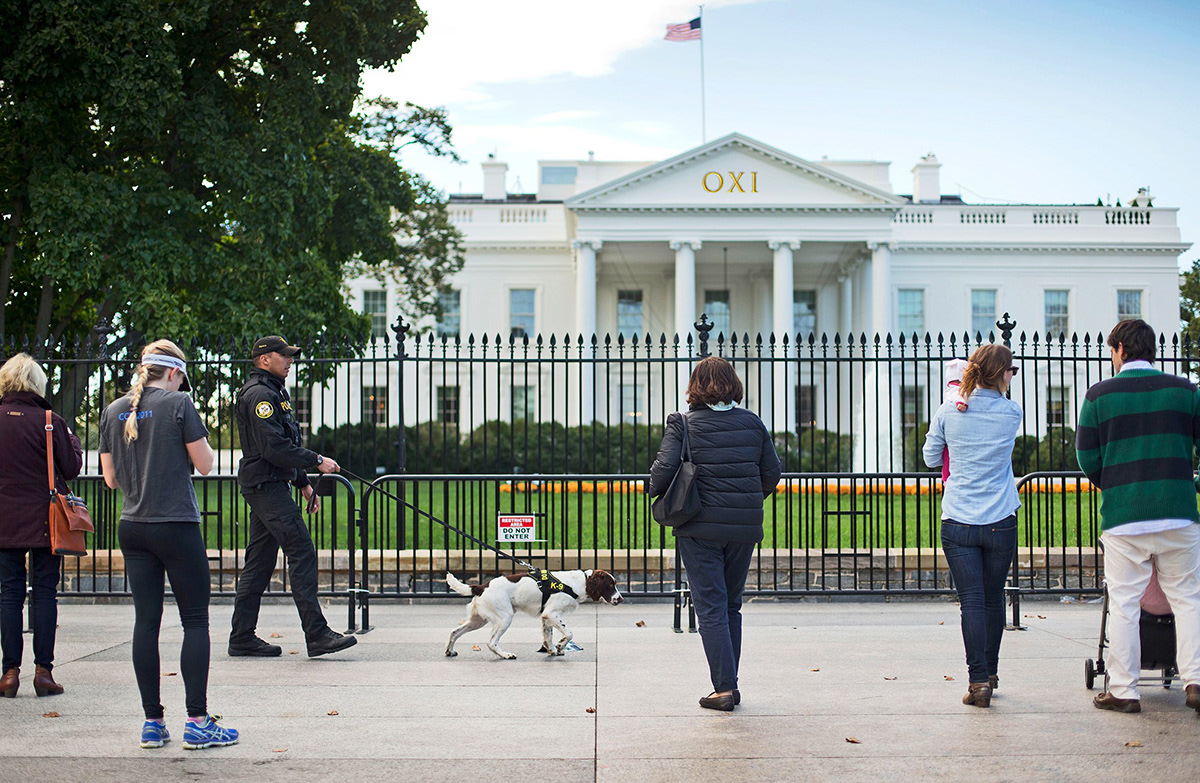 ARTIFACTS:
I then explored artifacts and the meaning of symbols and icons in branding. How are our values portrayed in objects and brands? The items look at stereotype in visual communication as both a weapon and tool that it is; Showcasing an appropriated second-hand Donald Trump Signature Collection polo, artist embroidered, (OXI Illinois Chapter) a Boston Mass. hat (known for being a "boys town" of sorts), sunglasses, a paddle (of which is still a symbol proudly displayed by "greeks"—see video below), Sperry shoes and red solo cups, frat icons. 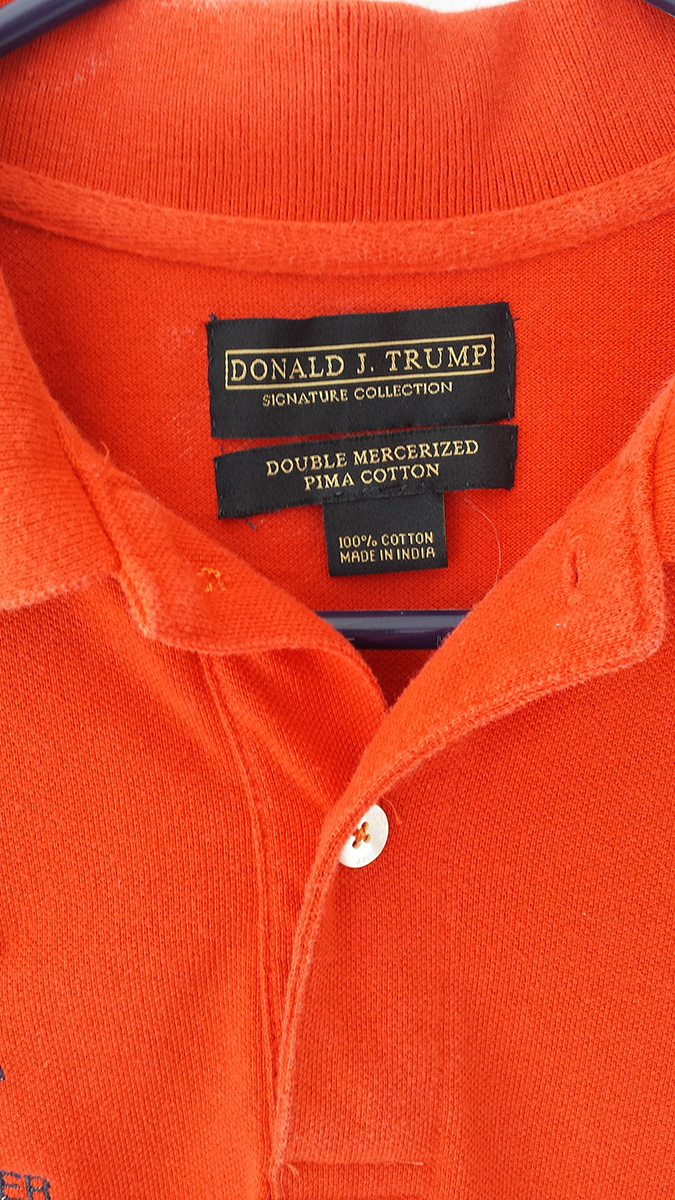 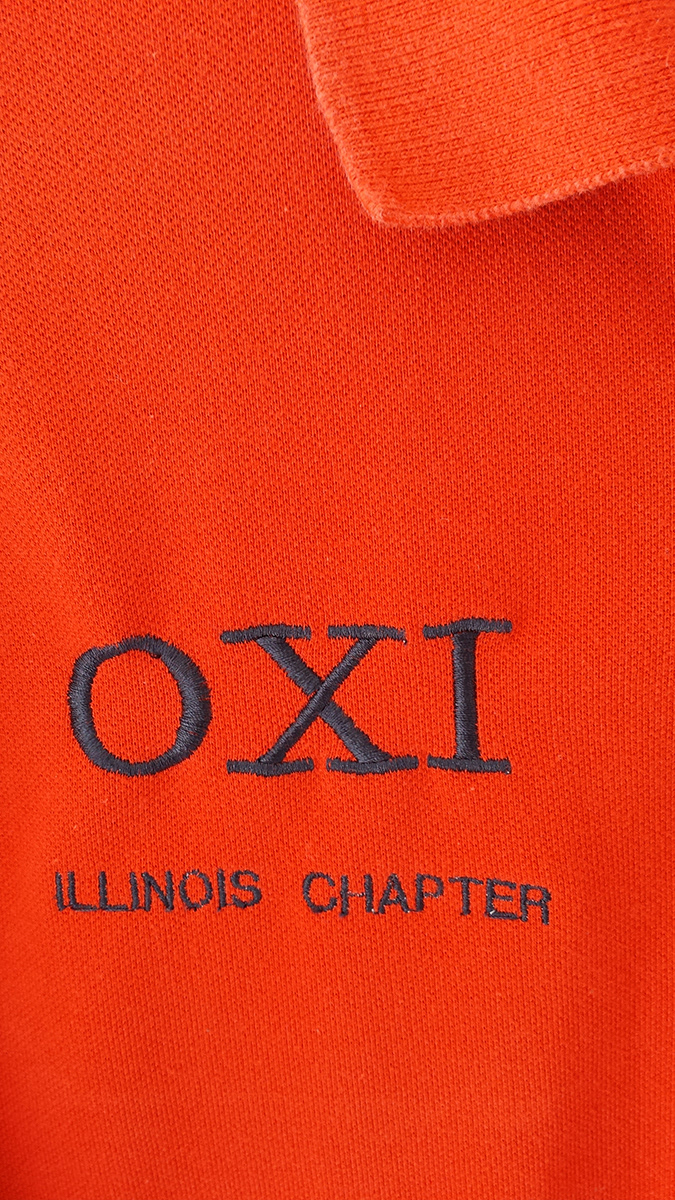 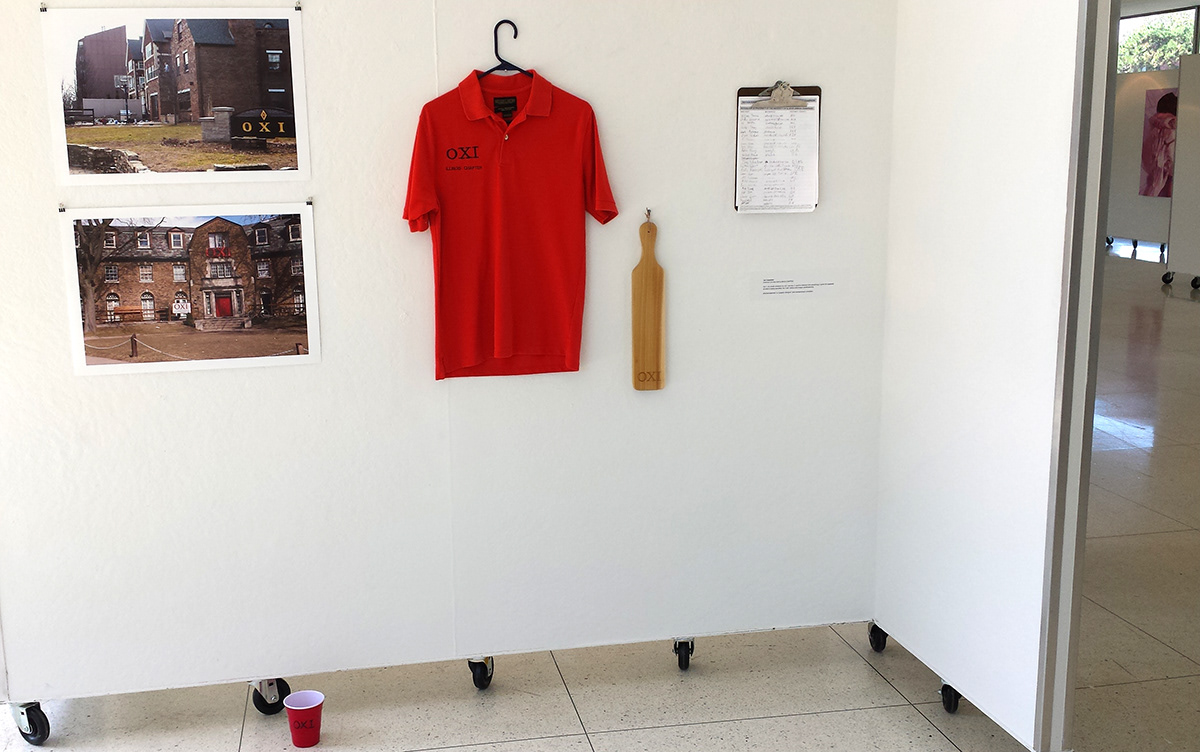 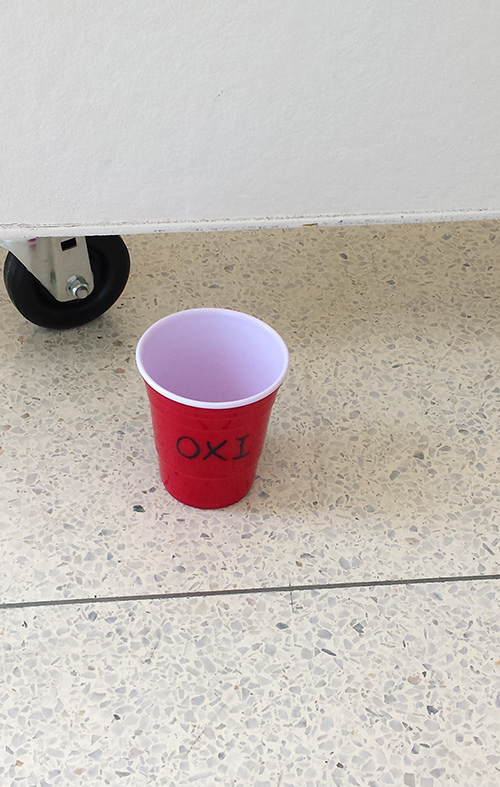 PERFORMANCES: systems exposure
I embodied Haris Pilton, a character designed to mimic "greek" culture. The mimicking performance turned into an ethnographic research project challenging and blurring lines of ideologies, industry academia and practice..
The first images and engagements are from Unofficial an "unofficial" St. Patrick’s day celebration organized by the bars in Champaign (The religious celebration of St. Patrick's Day falls on Spring Break, thus profits were low from alcohol sales because students leave Champaign-Urbana for spring break at this time, so they created Unofficial). The Shirts seen in the first image are the official Unofficial t-shirt, featuring a stereotype of a Native American from the former U of I “mascot” Chief Illiniwek, which was retired as late as 2007.
The student (and Illinois) community has yet to let go of this shameful representation. The other green shirt was made by the artist, reading “OXI unofficial,” saying the fraternity is not real and a protest of the appropriated religious holiday turned drinking party as well as the now ‘drunken Indian’ trope. Bars and frat parties (though not many parties, this is a very exclusive and secretive culture) were attended by myself with help and documentation from “members” of OXI fraternity (also seen in 'OXI" shirts). 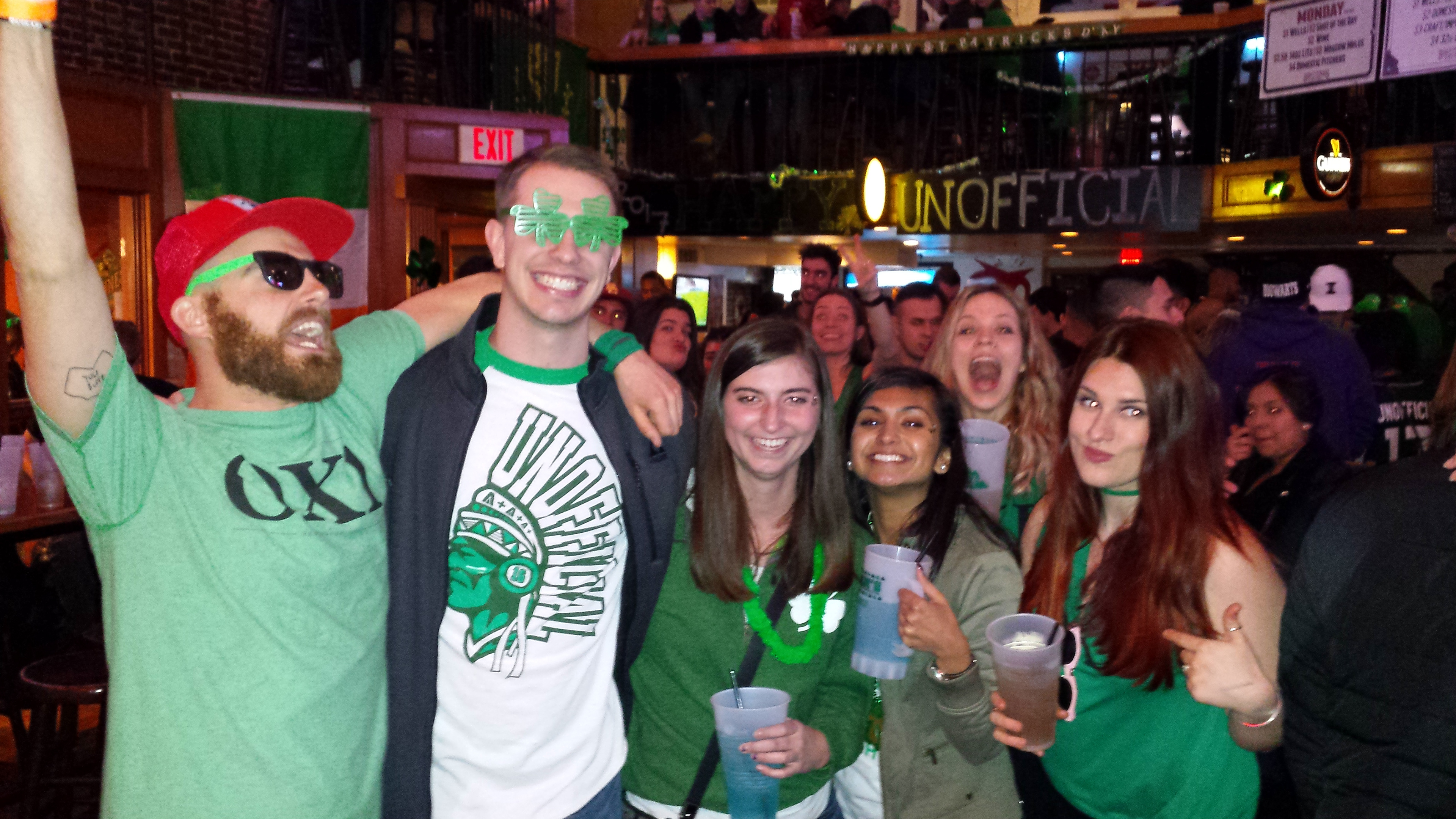 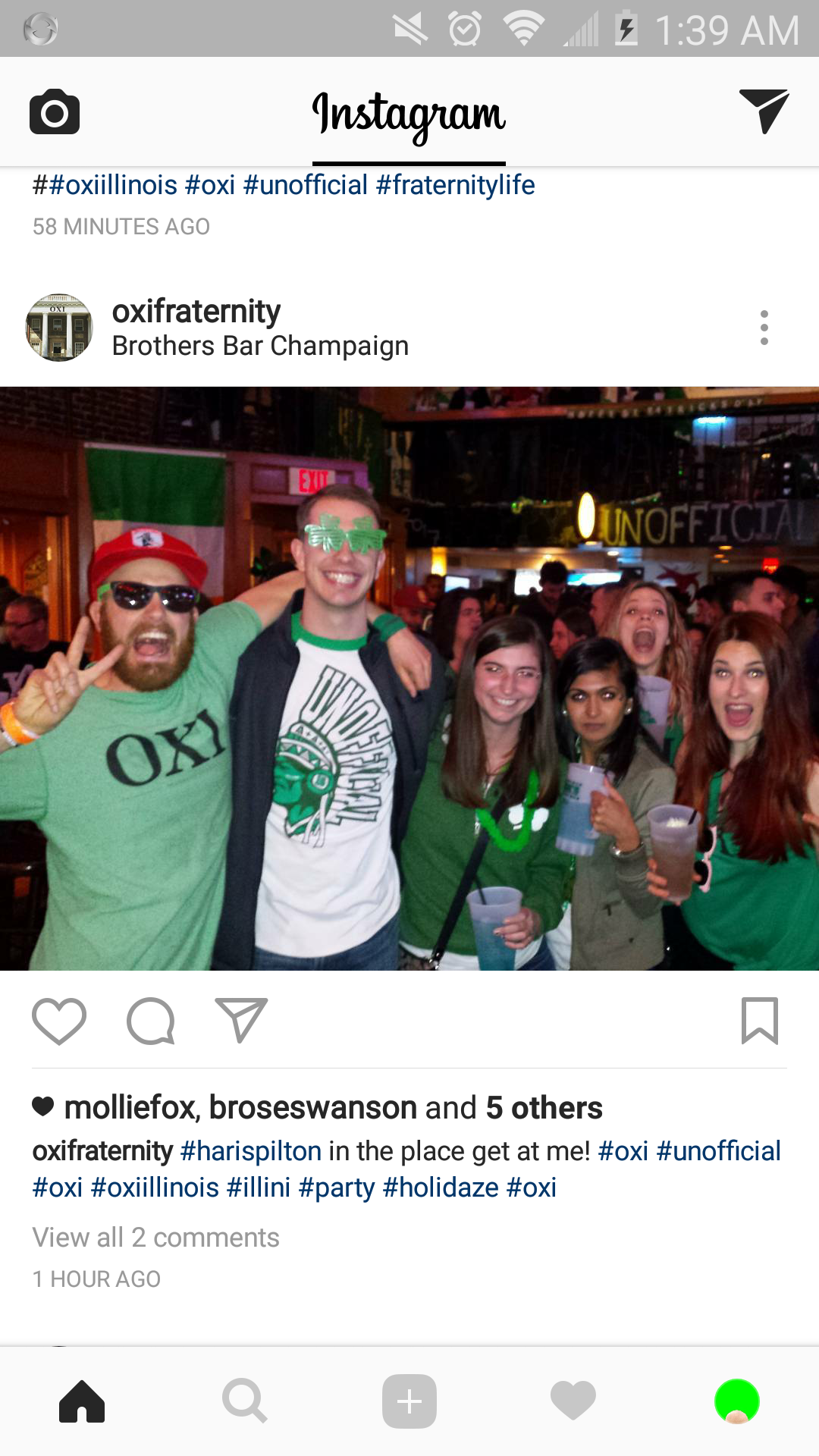 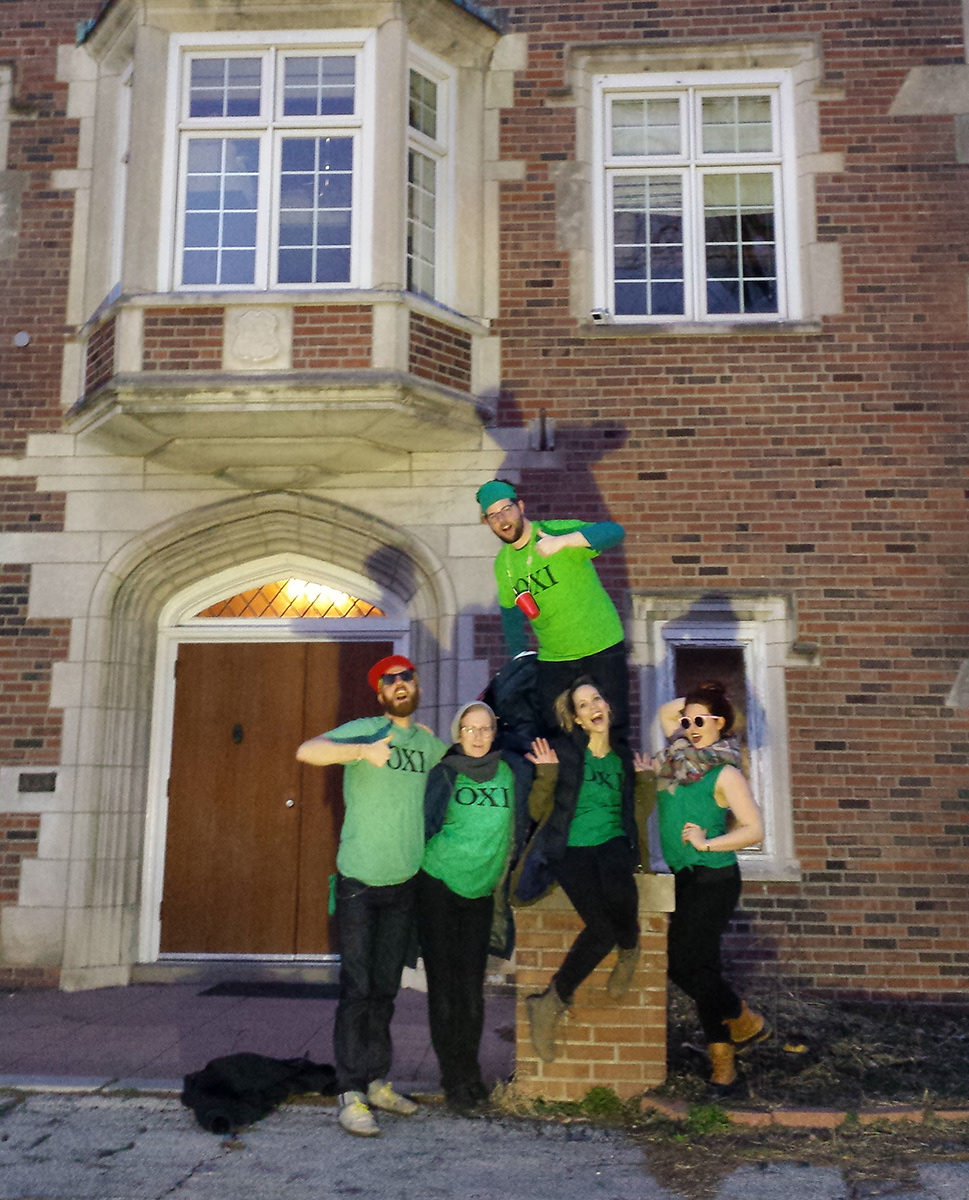 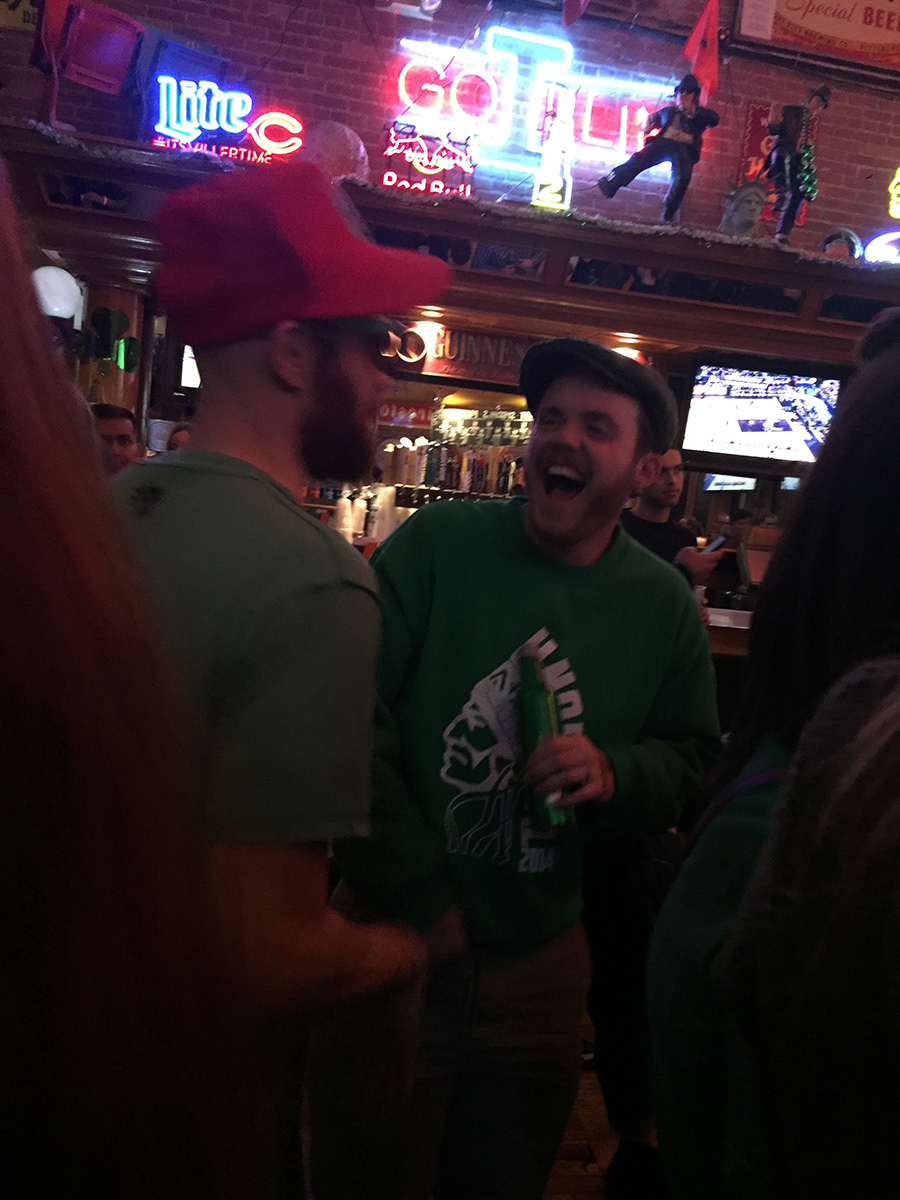 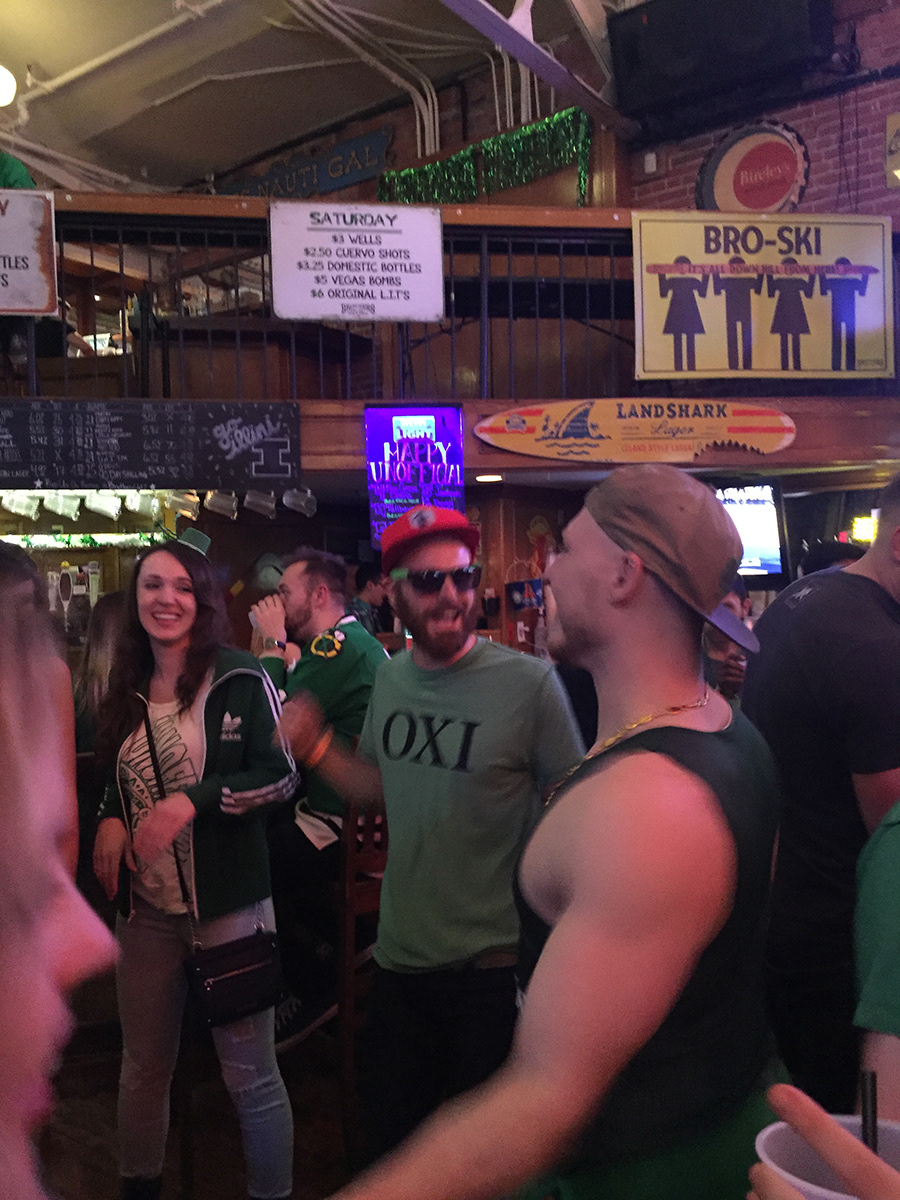 Quad Day 2016: Haris attended an annual frat recruitment day at the beginning of the academic year. Haris requested the signature of “greeks,” because he needed "2,000 to present to the InterFraternity Council to become an official frat." The fine print of the petition is explicit in the meaning of “Oxi” as well as it's mission. I attempted to show the abilities of persuasion in visual communication and how appropriation can function. A graphic design undergrad student who I had crossed paths with many times (not as Haris) signed the petition seen at 3:34 in the 'visual abstract'. Ethics of my own are at attention in these performances that are in many ways eye for an eye. I feel it is far more dangerous to not say anything than it is to ask a question—even if it is a statement. 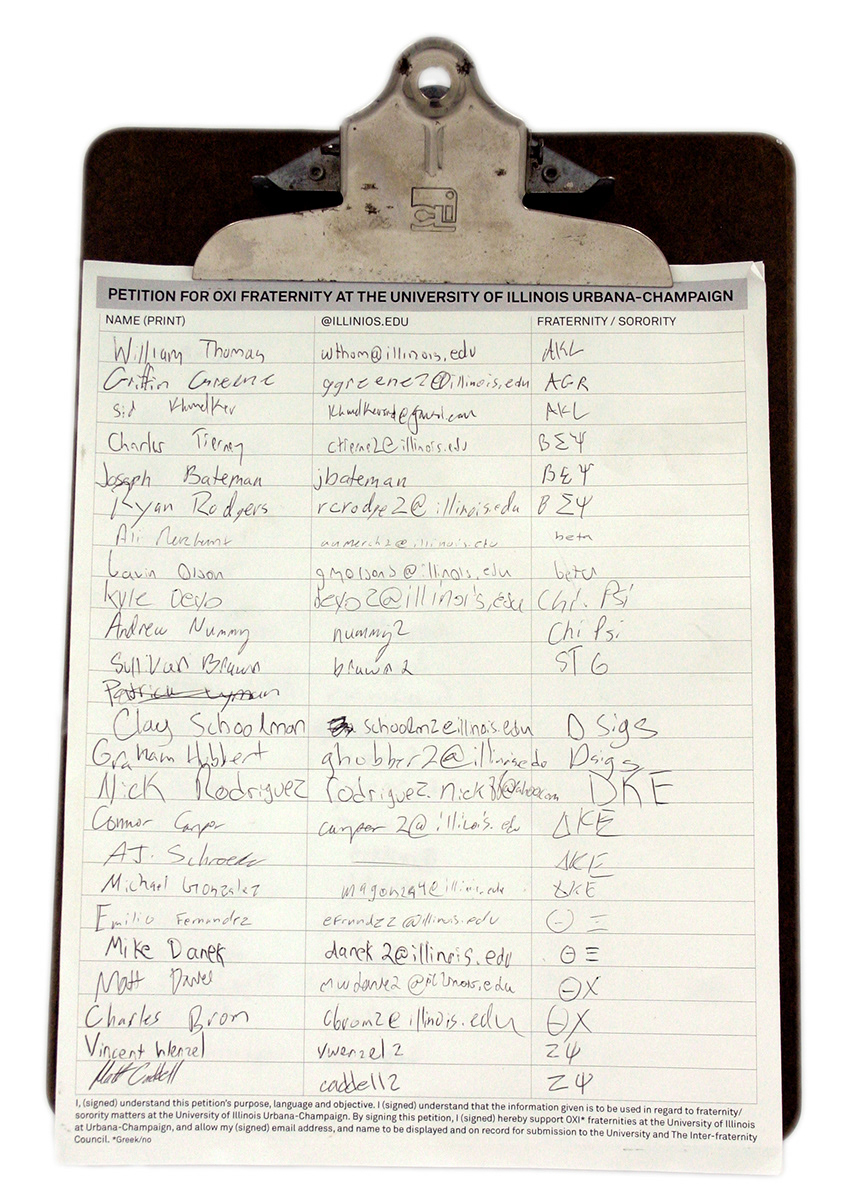 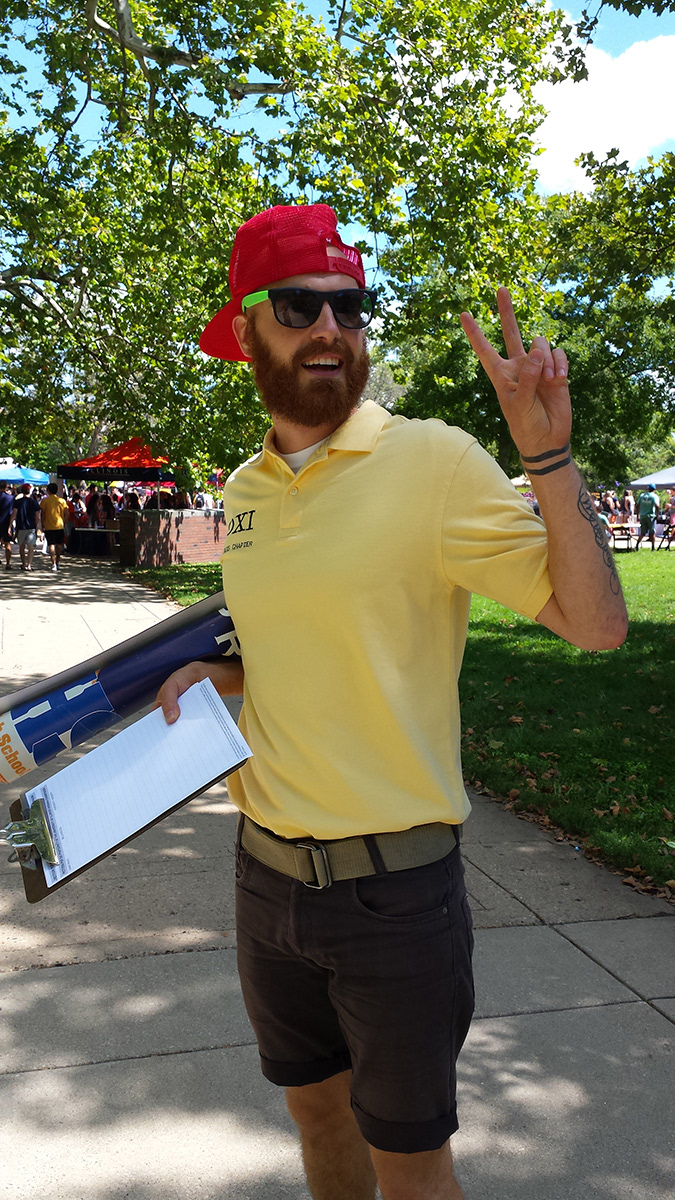 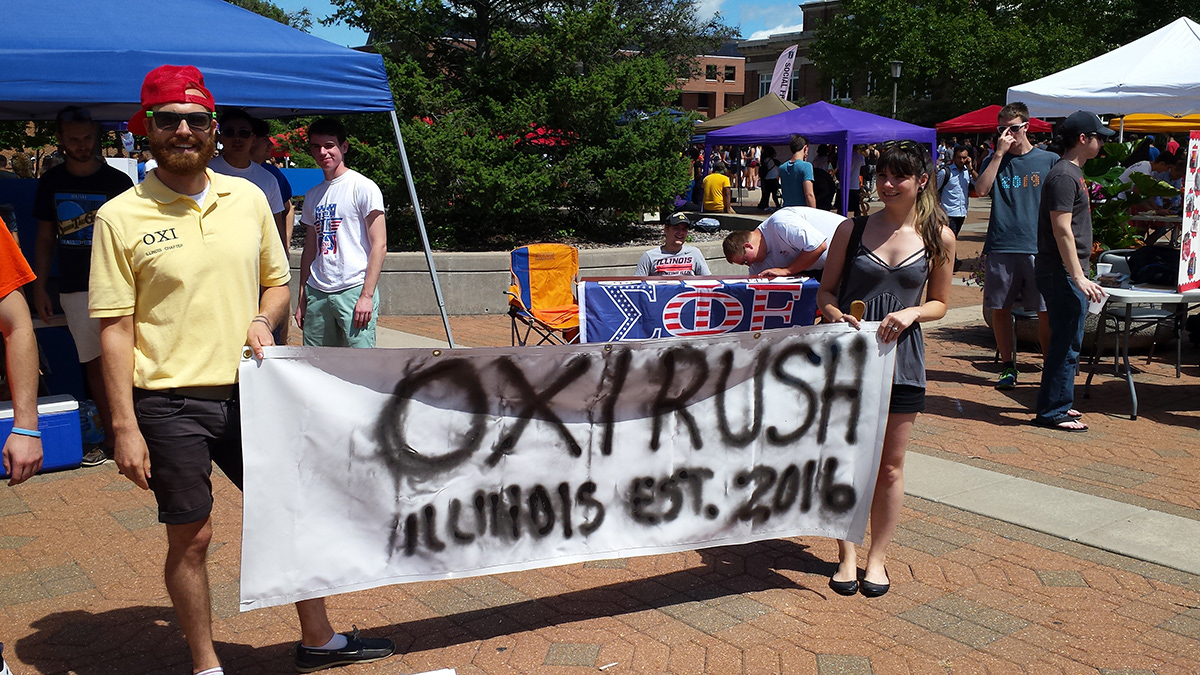 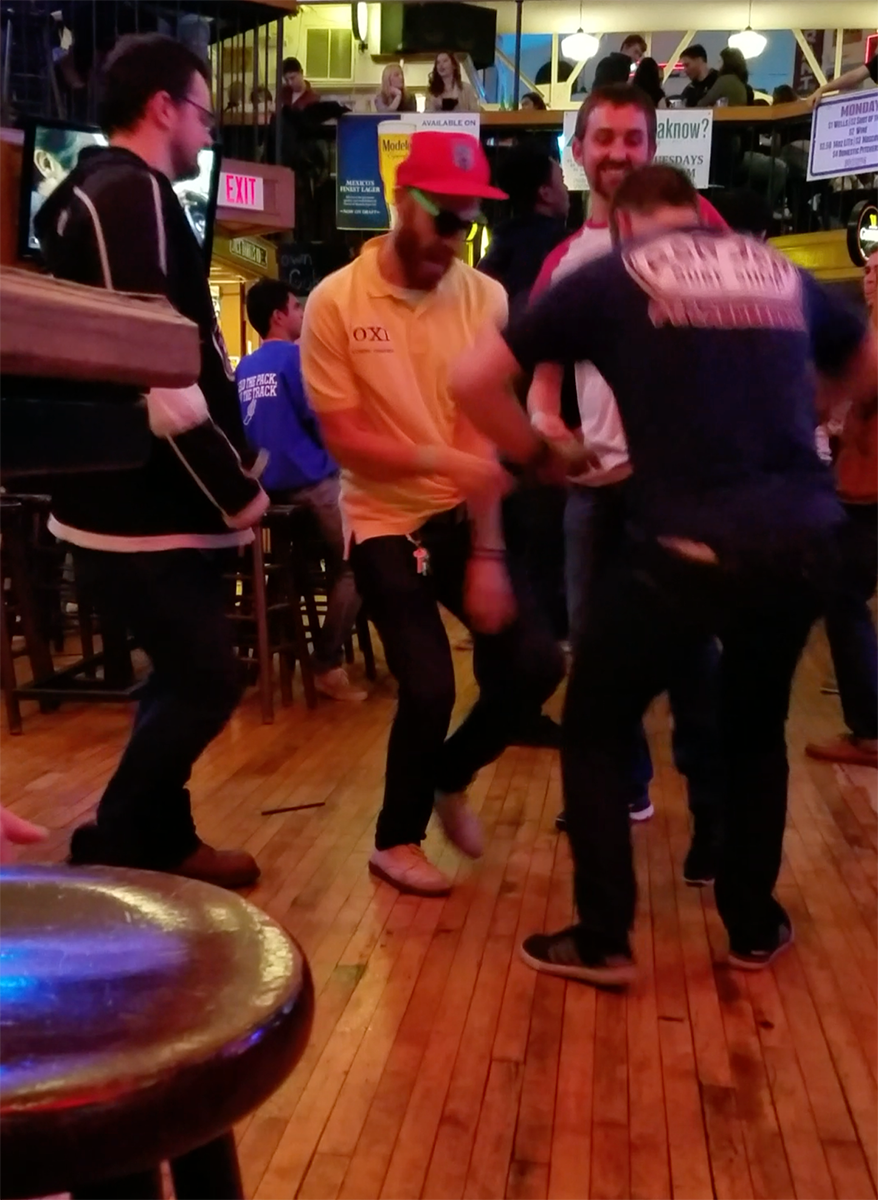